The EDUC-8 micro-computer was first published in the well known Electronics Australia magazine way back in August 1974. It was designed by Jim Rowe and was to be presented as the first do it yourself home build computer.

Sadly though just before publication, the EDUC-8's entry into the world was pipped at the post by the Mark-8 minicomputer design which was just published in the US. It was based on a new Intel 8008 microprocessor and had used the 1101 type RAM ICs.

EDUC-8 stands for EDucational Micro(u) Computer - 8 bit, although it's not hard to see the word "Educate" there as well.

By todays standards it severely lacked the features that you would expect from a modern day computer. It had barely enough RAM to store an average name and address, no fancy compiler, and no keyboard or video screen. It had manual program entry via the front panel switches and a series of LEDs for visual feedback for the contents of various 8 bit internal registers.

But hey, we're talking way back in 1974 when this machine was a milestone on the Australian home digital electronics scene.

Some basic details on the EDUC-8

I used to read EA all the time from when I was a young school boy. I worked jobs like selling newspapers and cleaning to save up the money each month to buy the magazine and purchase parts for some of the projects I liked. I still remember seeing the EDUC-8 articles and try as I might back then I found it difficult to grasp the digital circuit descriptions for the computer and I didn't feel confident enough to build it. Another factor which stopped me building it at the time was the cost of parts, quoted at around $300.00, which was a little out of my reach.

It was recently that I came across the computer again while fossicking around on the web. I thought it might still be worthwhile to try and build one for nostalgia's sake, but first I decided to create a Windows based emulator for it. I found a scanned series of the original articles on the web and started reading through them again. Funnily enough my brain is at the other end of the age spectrum these days and I still have difficulty understanding all the digital pathways of its operation. Nonetheless, a bit of perseverance and some help from a generous person with a real working EDUC-8 allowed me to get the emulator running. 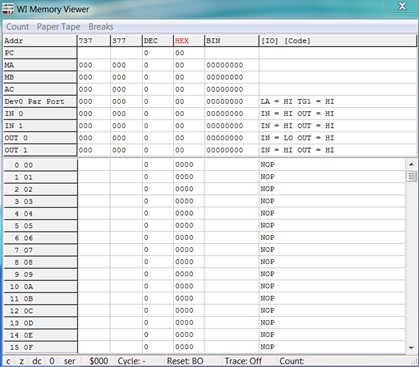 Build your own handheld EDUC-8 Emulator 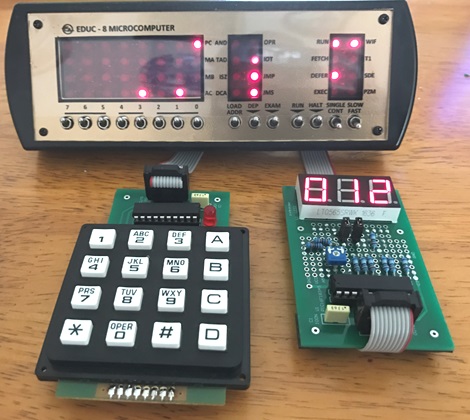 All details for building your own EDUC-8 that supports Normal and WIF modes are available in the download, including Gerber files for the PCBs and HEX code to program the microcontroller used in the project. (PIC18F47K40 for EDUC-8, and PIC16F18345 for IO boards)
Download includes many code examples including a calculator plus games such as 21, number guess, and beat the computer with tic-tac-toe
Download the EDUC-8 Emulator - v200519 (Zipped file) Updated 14/12/19

Visit Steven Pietrobon's web blog on modern day construction of the EDUC-8 and some more links.
Many thanks to Steven who volunteered a lot of time and used his own EDUC-8 computer to help get this emulator running properly.